When I started paragliding almost ten years ago, I found a lot of convincing reasons for flying with a coloured fabric. Amongst the most important were (and still are): lowest possible barriers to get a licence, aircraft easy to pack and carry everywhere, launchable and landable at a lot of places without need for any further help. The best aircraft for lazy and egocentric individuals like me.

But also on my wishlist: a more birdlike inflight position, more speed, more stability. Hanggliding offers these advantages, as we all know. For a long time now on my bucket list therefore was a flight with a flexible hangglider. But for long years, the opportunity never arose. In spring 2007 I even started with a hanggliding training myself in order to make my dream come true, and passed the theory exam with only little effort. However, I never started with the practical part. Too anxious was I, that I might get injured; and for sure I did not want to risk my pole position in the World Cup Rankings of the 2007 and 2008 tours.

But now these days are gone. Not flying comps any more, offers opportunities to explore other fun stuff in life. A few weeks ago, I remembered, that Roberto „Nic“ Nichele had offered to take me on a tandem flight with a hangglider. When I contacted him to find out, whether his offer was still valid, he was incredibly positive. Only one (small) problem: he was a little bit behind schedule with his own tandem licence. Fortunately it’s a networked world, and so he talked his friend Christian „Didu“ Bärtschi into taking me onto a flight.

Sunday, June 13. Forecast was getting worse from hour to hour, and the actual conditions in Interlaken were even worse. So instead of flying, Didu, Nic, Raoul Geiger, his student, his passenger and me, started with a small lesson of hangwaiting, a discipline that I mastered fairly well, since it’s very close to the art of parawaiting. Only after Raoul’s designated passenger was fed up with waiting and had disappeared, the rain stopped. 20 km to the west, more heavy rains were already approaching.

Up we drove to Luegibrüggli, and got ready as fast as we could. Taking off with the hangglider was a smooth, floating experience. Two, three steps, and up in the air we were. I understood then, what Nic had previously meant saying „I love taking off with a hangglider. I could do that ten times in a row.“ D’accord!

Didu floated through the shreds of clouds, a simply beautiful view. (On the downside: no lift, nothing, nowhere, not even a little, tiny bit). A few manoeuvres, wing overs and stalls, and we were already on the final glide. Didu dove down in a steep angle to gain energy, pushed the glider parallel to ground, and with an amazing speed we glided only one meter above the wet grass for at least 100 m, before we smoothly touched ground again. Nice! 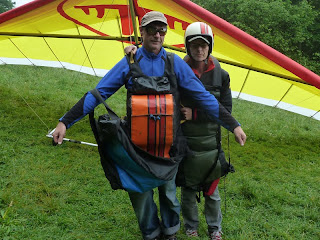 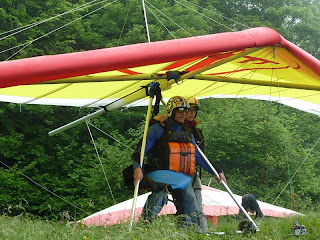 No simulation – the real thing 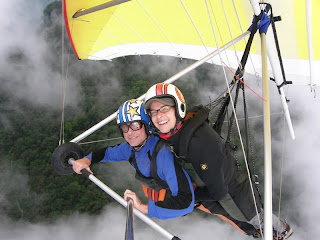 Playing between shreds of clouds 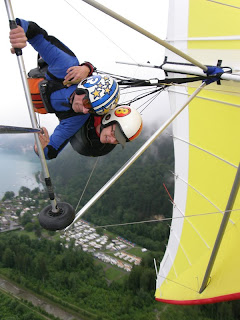 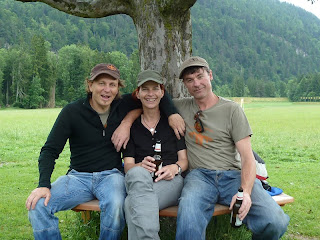 Thanks Nic and Didu for the flight. Wish you two, Carole, and the other guys from the Swiss team, all the best at the Europeans next month in Ager!

*Bucket List: Things to do before I kick the bucket.