About one year ago, I wrote about a mobile application built by Ergon, the company I’m working for. Since then, the iPhone has emerged, and found a lot of friends all around the world.

One of them is our CEO, Patrick Burkhalter. He decided to launch a development project for the iPhone. Since he is also a passionate paraglider pilot, he choose „Swiss weather“ as the application’s subject.

For a few days now, the application can be bought in the App Store. Its name: iWeather.ch. Have a look at the wind stream (animated on the iPhone): Detailed information about the available functions you’ll find on http://www.iweather.ch/index.html. 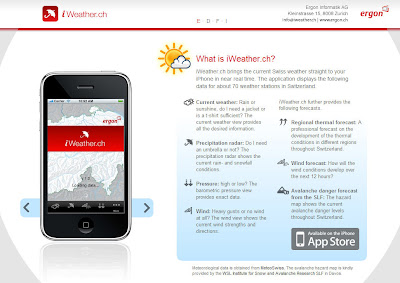 Already we’ve received feedback from happy customer. To noone’s surprise, some would also like to see more data. I’m with them. On my personal wishlist: animated satellite images, pressure difference graphs including forecasts, wind forecasts, animated isobar graphs including forecast… there is no end to that. – Since forecast data is quite expensive everywhere, and our vendor MeteoSwiss is no exception to the rule, it hasn’t been decided yet, whether future releases will include more forecast functions.

← Weltcup in Brasilien
Something completely different →