It was fun. End of January, Jörg, my mother and me visited Valle de Bravo. Jörg competed in the Monarca Open (see his report), and I focused on the holidaily aspects, like shopping flowers, strawberries and clothes, hanging out at the landing zone with my mom, and watching the pilots fly into goal. 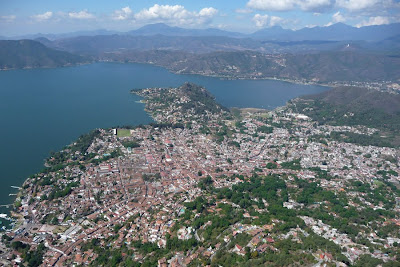 Of course, I also flew almost every day. Just not as a comp pilot, but as a free flyer, who got kicked out at least half an hour before window open by goal marshal Juan. With this unusual setup, I jumped at the opportunity to test some „not so hot“ wings. In December I had asked around among six different manufacturers for their current EN D certified wing. Roland Mäder from Nova CH lent me a demo wing, the Nova Triton size 18, and Patrick Roser from Niviuk CH let me his privatly owned Niviuk Peak size 25. Thank you very much! 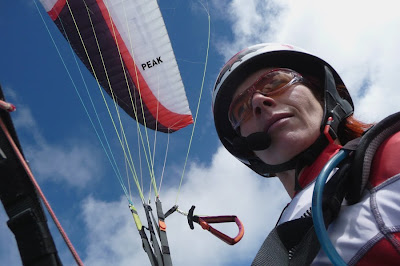 Quite a different feeling, as you might guess. Both gliders I flew on the top of their specified weight range. The Niviuk Peak I tried first. Taking off felt as simple as with a beginner’s glider. Thermalling, I felt immediately at home, and – competitive as my nature seems to be – soon sat on top of all the gaggles I tried. Gliding felt very relaxing, the wing just reliably above me, not talking a lot. However, pushing the speed bar was not, what I’m used to. Barely anything happened at all. On full bar, I managed only 12 km/h more than in trim speed. 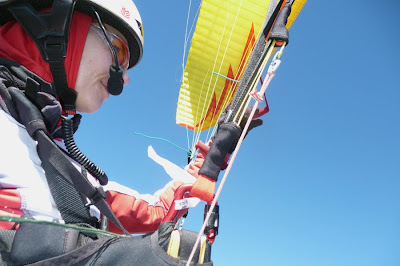 The Nova was a different kettle of fish. At once I loved the weight of the glider, only 5.3 kg. (Compare to my competition glider, the Boom 6, which weighs 6.8 kg, or to the Niviuk Peak with 6.3 kg.) Taking off was harder, and I had to work more to gain control. But once I was used to the different behaviour, that was fine, too. In weak and narrow thermals I no longer outclimbed everybody, because the wing dove down a little on the bad thermal side. On glide, the wing seemed comparably nervous, shifting a lot. So I got a little nervous, too, but nothing bad happened at all, the glider very stable the whole time. On bar I liked the Triton best, it was comparably fast and behaved still well.

And that’s sort of a conclusion as well: nice having tried these wings, but I did miss the combination of climbing performance and gliding speed, that a well balanced comp wing offers. Like Snoopy, I seem to be happier with my ears flapping in the wind.

← Kleine Flugstatistik
Wow! We Made It →